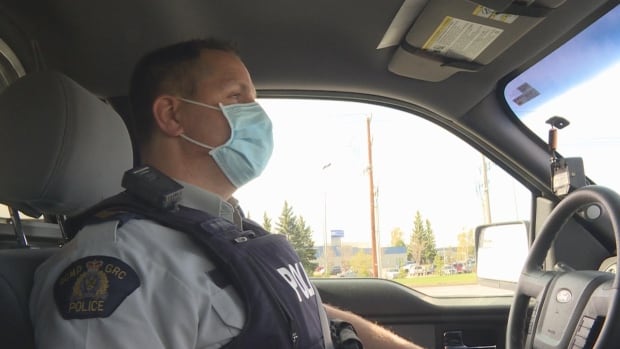 While on a routine patrol along a stretch of Highway 2 north of Calgary on Wednesday, Sgt. Darrin Turnbull of the Alberta RCMP traffic issues a ticket to one driver for speeding and another for distracted driving.

As Canada’s Road Safety Week kicks off — a national campaign organized by the Canadian Association of Chiefs of Police — Turnbull said officers across the province hope to see the number of tickets, dangerous driving behaviors and collisions decrease.

The campaign, which aims to raise awareness of safe driving measures, runs from May 17-23 and encompasses the Victoria Day long weekend.

The long weekend is usually a time when the RCMP sees an increase in collisions on Alberta highways, Turnbull said.

“We would be delighted to report that there were no fatalities over the long weekend, no one died,” he said.

“We hope that’s what will happen.”

“We see a lot of different offenses on the highways. Obviously impaired driving, whether it’s [due to] drugs or alcohol, is one of the big concerns.”

In a statement, Alberta RCMP said they will be particularly focused on enforcing sober driving over the long weekend.

“The driving decisions you make not only impact you, but everyone else you share the road with,” said Insp. Chris Romanchych of Alberta RCMP Traffic Services.

“So on this long weekend, we’re encouraging motorists to think of others when they get behind the wheel and to choose safe driving behaviors.”

Debbie Hammond is the executive director of the Safer Roads Alliance, an Alberta-based organization that campaigns to change unsafe driving behavior.

She said a combination of warmer weather, the long weekend and fewer COVID-19 restrictions will mean the roads will be particularly busy this weekend.

“Being in lockdown and not really being able to be with people for two years just intensifies the desire to go out and be with your friends,” Hammond said.

“So the best thing I can say to drivers is to make sure you have a plan, to give yourself extra time because you know there will be more traffic on the road and to remember that everyone world is like you, wanting to get where you’re going to be with the people you love.”

Hammond made a special mention of young drivers who might be especially excited about the summer season and upcoming graduation.

“Please remember, make sure you have a safe ride home and it’s never worth the risk. [to drive impaired],” she says.

“The fun doesn’t start until you get where you’re going.”