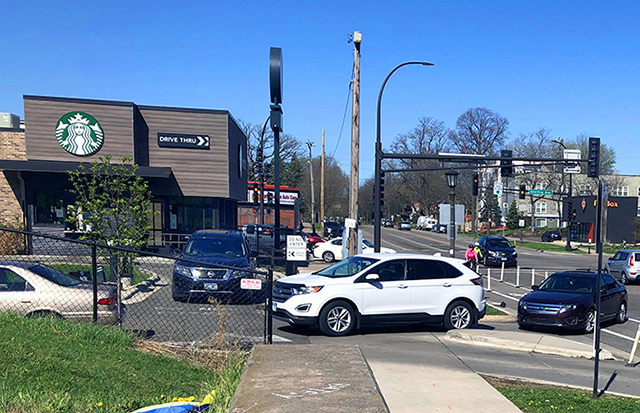 The year 2021 has been full of bad news for cities, as the plague has wreaked havoc on society in countless ways. But in St. Paul, an unexpected turn of events has resulted in the rarest of positive news: the transformation of the city’s worst-designed drive-thru. For the past five years, the drive-thru at Starbucks Coffee on the corner of Snelling and Marshall has been a thorn in the side of Marshall Avenue. In April, the drive-thru abruptly closed, after a demand from workers to stop using police officers to direct traffic.

At the time, I was sure the closure was temporary. Drive-thru is a lucrative piece of the restaurant chain’s puzzle, dramatically increasing store revenue. And during COVID, drive-thru is becoming more dominant across the country, expanding in many places.

But then, just this month, Starbucks announced they were making the change permanent, deployment of new plans to convert the former drive-thru space into a pedestrian-friendly patio.

How we got here

The Snarshall Carbucks dates back to 2015, when the cafe company submitted a site plan for the cafe on the small corner lot, a former auto repair shop. I was on the St Paul’s Planning Commission at the time and remember discussions between town staff and officials about whether this cafe was a good idea. We had a heated debate about granting a waiver to the FAR (floor area ratio) required by zoning, with many feeling it lacked density. But the plan was eventually passed by a disputed vote, thanks to arguments that the site had an unusual shape, ill-suited to other developments.

In retrospect, for the most part, we missed the mark. During the discussion at the panel, few people spent much time on the potential impacts on traffic that the drive-thru could cause and on the merits of the traffic study provided in the application. (Meanwhile, some public commentators perfectly predicted what would happen.)

Part of discussing traffic is a matter of authority. When city and county engineers sign off on a traffic study, as they did in this case, it leaves little room for the public to dispute the results. Unless you’re someone who also has traffic engineering skills, professionals almost always trump amateur concerns.

After some debate, the Exemption and Conditional Use Permit (CUP) was granted by the City Council. The new store was built the following year, by which time the options for city regulators had narrowed considerably.

It became clear early on that Starbucks drive-thru was causing traffic problems. The fundamental flaw was a lack of stackability, compounded by the constrained and confusing design. For one thing, there were often far more people interested in having coffee while driving than in places where their cars could idle. The resulting queue invariably backed up the street and, at times, even blocked the busy intersection of Snelling and Marshall.

Meanwhile, the design of the queue and its intersection with the street has sparked an ever-evolving battle between infrastructure and driver inattention. For example, after a few drivers mistakenly crossed the sidewalk and the sidewalk (presumably damaging their car), the company installed a rough fence at the end of the exit, clearly indicating not to drive on the Bank. Meanwhile, cars looking for coffee regularly blocked the bike path, so the City began installing plastic bollards to better delineate the space. As they were mowed down, the bollards were reinstalled with variable and futile frequency.

Some of them worked, but nothing seemed to solve the fundamental problem of too many cars in too little space. Eventually, with months of complaints from cyclists and neighbors, the St. Paul Department of Safety and Inspections (DSI) began requiring a police officer to be on duty to direct traffic and guard streets and sidewalks. cleared from 7 a.m. to 10 a.m. each morning.

This is the situation that persisted for more than a year, a difficult status quo that lasted until 2021.

To really understand a situation, it helps to see it in person, spend some time and linger at an intersection. During the years of carbucks limbo, a small group of St. Paul’s urban planning advocates, myself included, made it a habit. Every month or two, a few people would gather on the grass under the billboard with donuts and coffee, and see how the drive-thru worked in real life.

We usually arrived a little before 10 am, just in time to watch the last minutes of the policeman’s performance. The officer (and there were several over the months) calmly motioned cars to line up two abreast and stopped people from making illegal turns or stopping traffic. To me, this seemed like one of the most tedious tasks on this side of the airport queue, and most agents I spoke to seemed to have a slight sense of humor about of their fate.

A few minutes after the law left, the problems were about to begin. Without the police on site to literally direct traffic to a more space-saving pile, it didn’t take long for drivers to start idling on the sidewalk and blocking the bike lane. A few times an hour, the caffeine traffic jam filled the entire drive-thru and blocked all of Marshall Avenue eastbound.

Another observation: watching the cars slowly go through the twisting circle, I was continually amazed at how long it took. Drive-thru promises fast service, but if you timed the process, like I did, it’s quite slow. From the moment a car customer arrived in the queue to the moment they left, presumably happy, the elapsed time often exceeded ten minutes. Smarter customers simply parked on Marshall Avenue (albeit often illegally) and ran into the store for a coffee in half the time.

Day after day, every morning, the drive-thru continued like this, generating small, constant moments of chaos before the pressure subsided in the afternoon as the cafe lost its appeal.

The story has a happy ending, at least if you don’t mind parking up and walking into a cafe. In April 2021, amid the aftermath of the Minneapolis police killing of George Floyd, some of Starbucks’ employees demanded the officer’s removal. Faced with a lose-lose situation, the company shut down the drive-thru and it has remained that way ever since. The new proposal, which has just been approved by the City, involves replacing the café window with a patio and a bike rack.

Drive-ins now occupy a paradoxical place in American cities. For one thing, during the pandemic, demand for drive-thrus has increased and companies have found ways to make them bigger and more efficient. On the other hand, cities that emphasize walking have lobbied to remove drive-thru; for example, Minneapolis recently banned new drive-throughs citywide.

On the contrary, Starbucks’ drive-thru illustrates how difficult it is to change something after it’s been built. Even after five years of constant problems and complaints to the city’s DSI, there was little hope that the regulations would close the crossing. Instead, it took a completely different issue – a lack of trust in the police – to trigger change. Carbucks is the exception that proves the rule.

All this is far from saying that, this summer, I will take great pleasure in drinking an espresso on the new terrace of the Snarshall Starbucks.

MinnPost’s in-depth, independent news is available to everyone for free – no paywall or subscription. Will you help us keep this going by supporting our non-profit newsroom with a tax-deductible donation today?