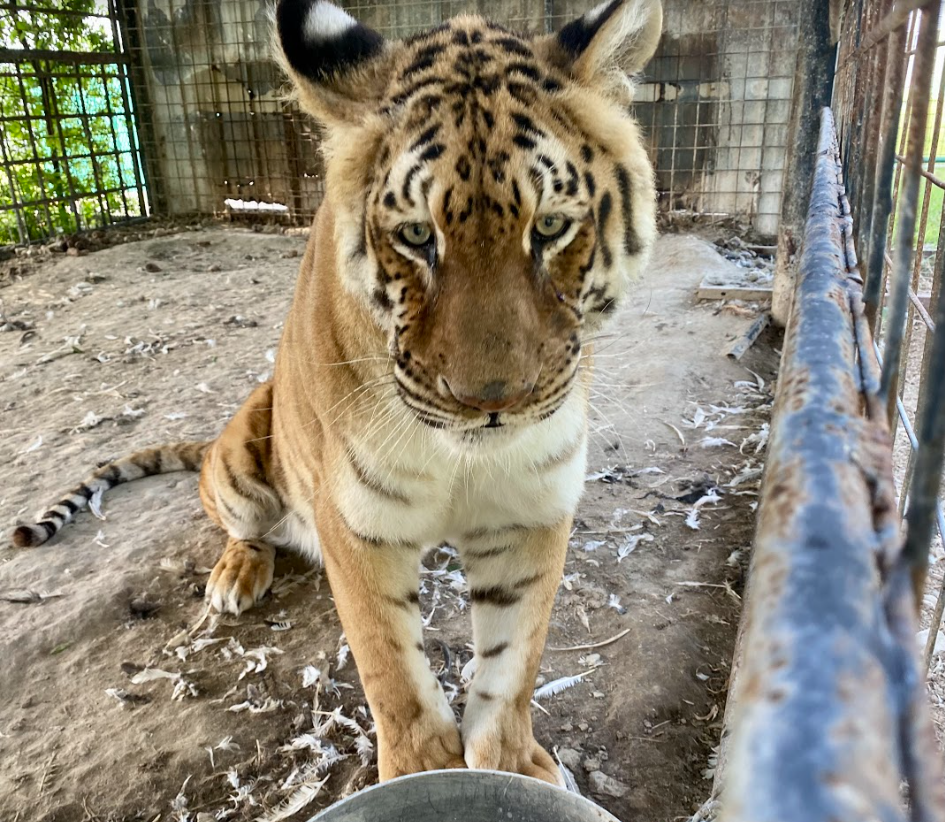 The Oakland Zoo in California, Turpentine Creek Wildlife Refuge in Arkansas and Lions Tigers & Bears in California all collaborated to save two tigers, a lion and a tiger hybrid from the Oklahoma facility that was once open to the public and offered petting and photo opportunities for the little ones.

“There are major red flags that these animals have fallen victim to the cub petting industry,” said Bobbi Brink, Founder and Director of Lions Tigers & Bears. “These cats were declawed and in poor health and living conditions. They were probably bred to be photo props, and once they got too big and were no longer profitable, they were abandoned. We are the voice of animals, and we must work on education and legislation, because every animal saved makes a difference.

The facility was cited and shut down by the USDA in 2008 after multiple safety and welfare violations.

The four rescued big cats were the only animals left in the abandoned facility.

“These big cats lived in dirty little enclosures. Shelter was provided, but it was horribly weathered and rotten,” said Tanya Smith, President and Founder of Turpentine Creek Wildlife Refuge. “Apart from a few good Samaritans, they were left alone, fed inconsistently and needed veterinary care. We are so relieved to be providing new homes for these animals and helping them to thrive.

Animals rescued, all female and declawed – a common practice in the petting industry – include:

The Ringling Bros Circus. will return next year without animals on tour

“For the past thirty years, we have fully engaged the Oakland Zoo Tiger Habitat as a sanctuary for tiger victims of the circus, roadside zoo, private property and animal petting industries. These tigers need help, and we can provide that help while educating the public about the dangers of animal exploitation in these industries.When a concerned Oklahoma resident called us to help these big cats , who have endured so much suffering, there was no doubt that we would step up and give them the homes and care they deserve, at the Oakland Zoo and our partner sanctuaries, for the rest of their lives,” Nik Dehejia, CEO of the Oakland Zoo.