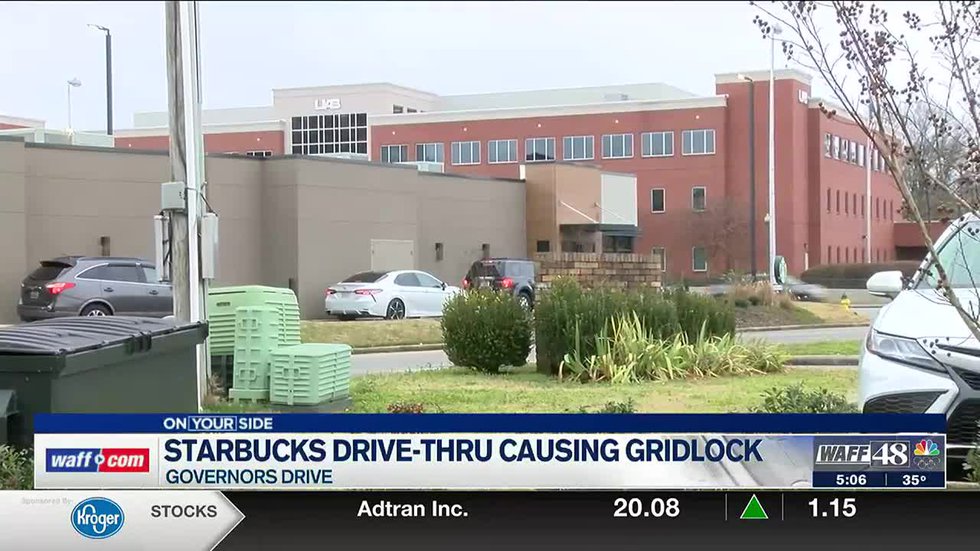 HUNTSVILLE, Ala. (WAFF) – Most of us love having a morning cup of coffee on the way to work or school. But if you’ve been on Governors Drive during the morning rush hour, you’ve probably seen a traffic jam entering the Starbucks just down from the hospital.

“It’s a road safety issue,” Huntsville City Councilman Bill Kling said. “There’s a lot of westbound traffic on Governors Drive during those rush hours, and then all of a sudden there’s a traffic jam in one lane, not from traffic, but just from cars that are parked to cross the transport line to have their coffee.

Due to the business layout at 310 Governors Dr SW, the drive-thru line overflows onto Governors and blocks westbound traffic. This line also blocks cars trying to get out of the drive-thru.

Kling thinks there are ways to fix the problem, such as creating a merge lane entering the business from Governors Drive. He also suggests reconfiguring the drive-thru so that the line leads to the street behind the business.

“We want everyone to enjoy their coffee, but there should be a better way to handle this situation,” he said.

The authority to make the necessary changes rests with the state highway department. Nonetheless, Kling believes a solution can and must be found.

“I think this is a very important issue because for me one of the biggest concerns I have about the city is making sure we stay ahead of the curb when it comes to the traffic, then it’s kind of a self-induced issue that we have and we should be able to work out a way to fix it between the city and the state highway department,” Kling said.

A representative from the City of Huntsville Traffic Engineering Division responded to Kling’s comments. He wrote,

“The ‘merge lane’ that Councilman Kling can evade is a deceleration lane to turn right, which is only doable IF there is enough ROW to build one. Also, the typical time to request an off-site improvement is before the business is built, unless they are looking to add other improvements after a facility opens. The DOT would be the only one, in this case, to make minor/major modifications to the roadway.

WAFF contacted DOT but did not hear back.

Koho gets $210 million for an alternative to payday loans

How to drive safely on ice and in freezing conditions